The Hofbrauhaus Las Vegas is the first German/Bavarian beer hall and restaurant in Las Vegas which creates a true Bavarian beer hall experience that is even more than a dining adventure. No ordinary restaurant, Hofbrauhaus Las Vegas is an energetic party daily, with authentic German bands, boisterous sing-alongs, dancing in the aisles and on the benches, and premium Hofbrau beer. From its hand-painted ceilings and live bands to its imported beer and delicious food, Bavarian hospitality abounds. Guests can savor schnitzels, sausages, sauerbraten, pretzels and so much more.

The world’s only true replica of the Munich original followed the original plans of its parent with little variation beyond the use of only one of the three levels used and an enclosed Biergarten. Replication required a two-year negotiation for licensing alone. 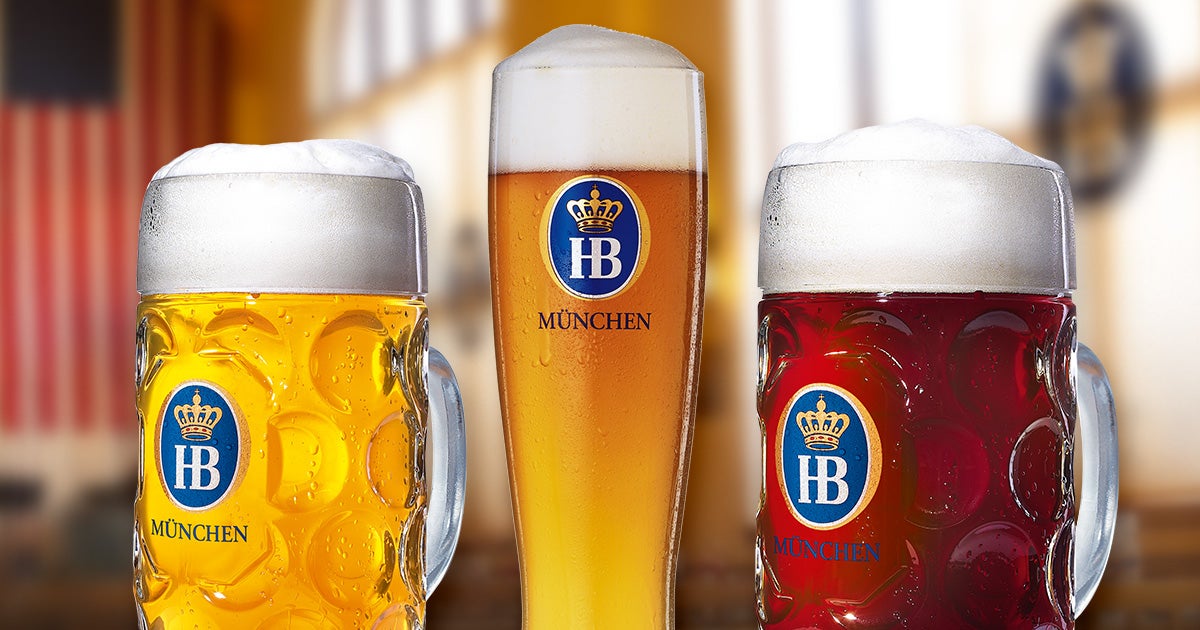 The Hofbrau beer is brewed using the original recipes handed down over 400 years ago by Wilhelm V, the Duke of Bavaria. Because there are no substitutes for the water quality and premium ingredients at the base of Hofbrau beer flavor, the beer is imported directly from the brewery in Munich, Germany. Completely state-owned, the brewery was originally only for the king and his staff until its beer was made available to the general public in the 1700s. Hofbrauhaus Las Vegas features three brews regularly on tap: Hofbrau Original Lager, Hofbrau Dunkel, and Hofbrau Hefe Weizen. Throughout the year, Hofbrauhaus Las Vegas features also the following seasonal beers: Hofbrau – Oktoberfestbier, Maibock, and Dunkel Weizen. The kegs reside at the perfect temperature in the beer cellar, which easily holds enough beer for 10,000 34-ounce steins, as well as housing for the restaurant’s chilled wine and liquor for signature shots. 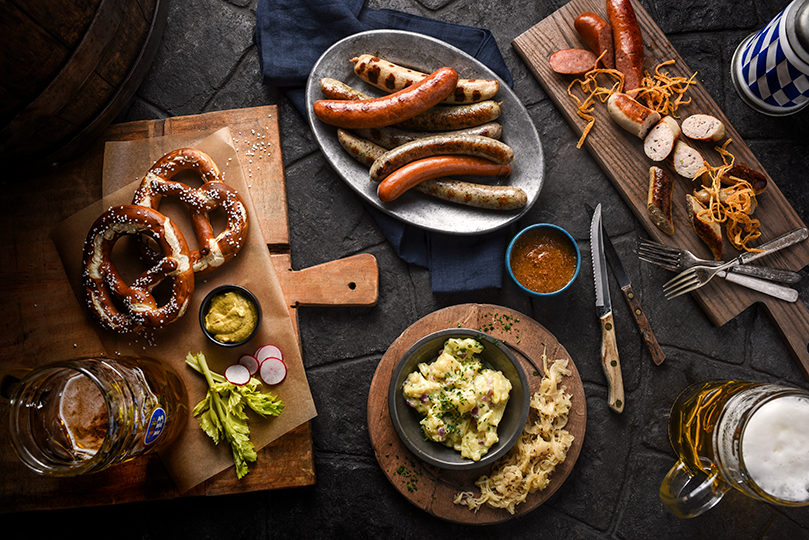 It doesn’t get any more authentic than the dishes at Hofbrauhaus Las Vegas without traveling directly to Bavaria. Imitation and shortcuts are unacceptable; therefore, 80% of the food is produced on-site with genuine ingredients; no mixes or processed blends are used. Like the beer, whatever is not available in the authentic state is imported. The sauerkraut, for instance, is brought from Germany, yielding a smooth, creamy pickled cabbage that is not sour or overpowering as Americans are accustomed to. Wonder why the pretzels are unlike any ever tasted? Hofbrauhaus Las Vegas brings them in from the bakery overseas, then bakes them fresh for each table — chewy and perfectly browned on the outside, light and fluffy on the inside. The pretzels are shipped from Germany under stringently monitored conditions. Check out the delicious Bavarian Menu here. 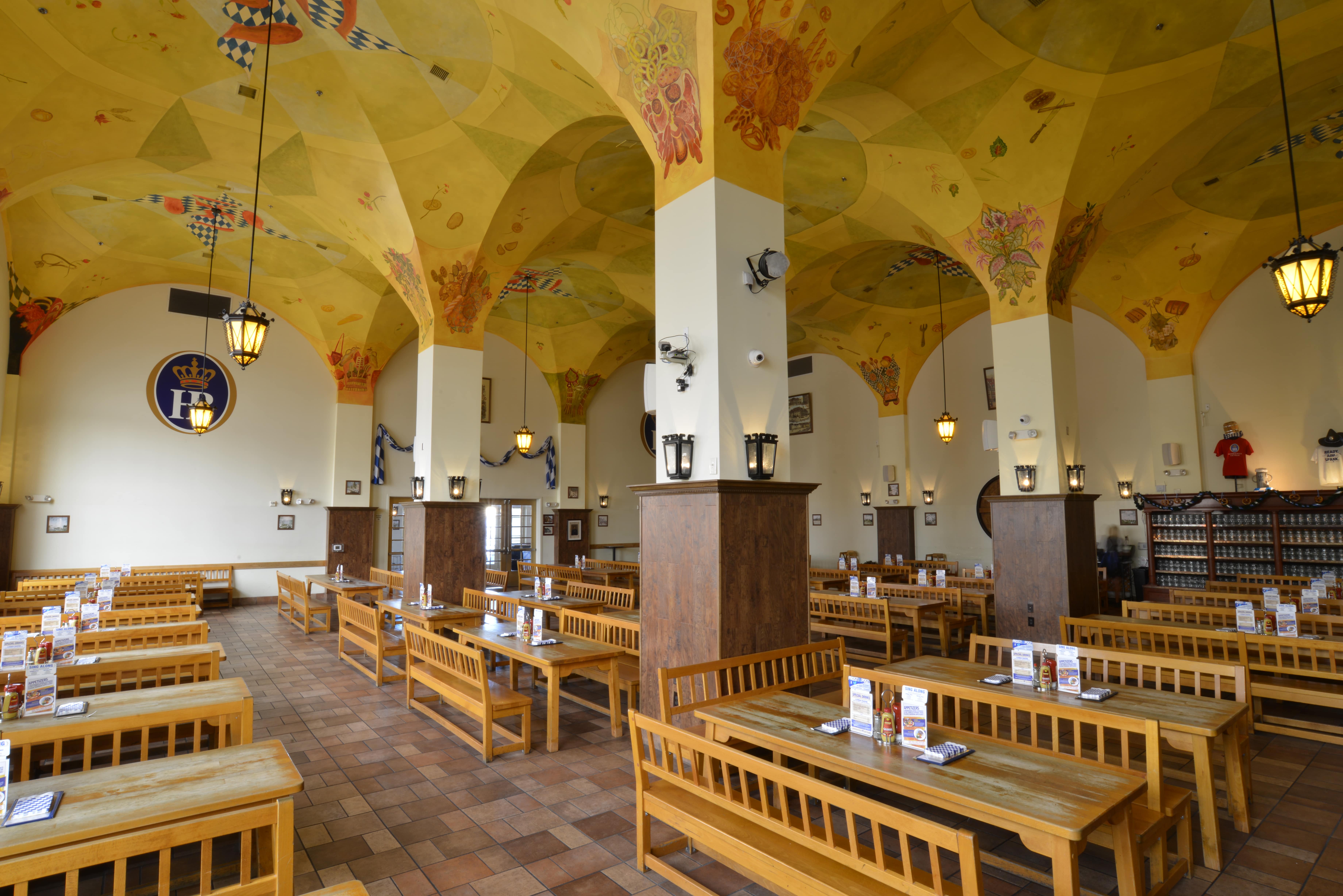 The beer hall, called Schwemme, of Hofbrauhaus Las Vegas, a 1:1 copy of the Hofbrauhaus in Munich, Germany, seats approximately 400 guests. The benches and tables are of sturdy European construction and are designed to withstand the weight and revelry of repeated guests, whether seated or standing high with steins aloft. The beer hall ceiling is an exact copy from the original and features the same images as its predecessor; no graphic is repeated, each is unique with no duplication. The design was recreated by a local artist over four weeks, working on scissor lifts with images on an overhead projector as a guide.

“Durst ist schlimmer als Heimweh” meaning “Thirst is worse than homesickness” is the reminder to each guest passing from the beer hall into the anterior Biergarten of Hofbrauhaus Las Vegas which seats approximately 430 guests. Here, diners can enjoy a quieter atmosphere for conversation in a space near identical to its Munich counterpart. A ceiling resembling clouds floating in sky blue covers it, rather than the open sky as in Germany, due to Las Vegas’ hot Mojave Desert sun. The Biergarten features a sparkling circular fountain and six chestnut trees as in its homeland. The chestnut trees, boasting live trunks, were completed with stunning attention to detail.

Fun Fact: An American chestnut leaf has a different shape than the German species.  Hofbrauhaus Las Vegas went to great lengths to replicate the German leaves; it took three months just to find the molds of the appropriate German shape and another three months to create the leaves and ship them to Las Vegas. Then, ten craftsmen worked for fourteen days mounting the trunks and branches and hand-placed thousands of individual leaves on each tree.

From beer to automobiles, Germans are known for quality, innovation, and efficiency, and Hofbrauhaus Las Vegas itself is no exception to the reputation. A $250,000 state-of-the-art beverage system, first of its kind in the US, dispenses everything from beer and wine, liquor to soft drinks, and coffee with the insertion of a special key. Servings are instantly tabulated to appropriate checks with no loss of product or error in measuring, while significantly reducing the staff needed as well as service time. The glasses and mugs it fills are treated with equal consideration: they are washed separately from dining ware, using different cleaning fluids, to ensure no residue affects flavor, aroma, or foam. The dining ware also receives the attention of a comparable degree. It is cleaned on a special conveyor belt traveling through a dishwasher that is larger and more expensive than the standard, yet because it requires less labor and effort. Fresh food destined for diners at the beginning travels along a conveyor as well, making the kitchen fast and efficient and ultimately helping guests get their food quicker. 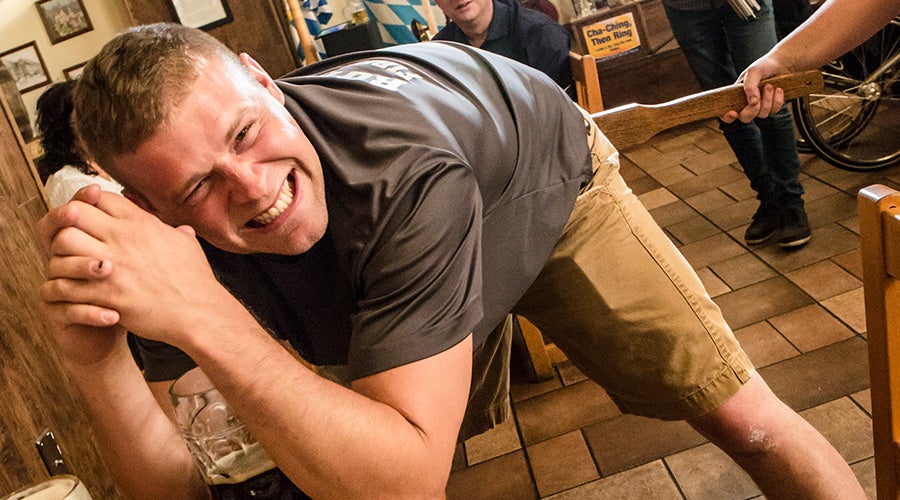 Classic German shots delivered on a paddle that can also deliver a stinging blow make Hofbrauhaus Las Vegas one-of-a-kind. A guest started the phenomenon unique to the Las Vegas restaurant by requesting a paddling following a liquor shot, and it became more popular than anyone could possibly imagine. After seeing this performed at the bar, many patrons started to ask for the same “treatment,” and Hofbrauhaus Las Vegas is happy to oblige. When a guest orders a shot, it’s served on a long wooden shot paddle that fits six shots. After downing the shot, the diner is finished off with a solid smack from the paddle, if requested. If the shot doesn’t give a sting, the shot paddle just might. Click here to read what our very own spankstress Judy has to say!