What is it about shaking our butts like a bird that is just so darn irresistible? We’re not sure, but we know that when our band strikes up the undeniable first notes of The Chicken Dance, everyone is on their feet and ready to get quacky!

The Chicken Dance has been an Oktoberfest staple for decades, but we bet you’re wondering how this oompah-riffic tune even hatched at all.

First we think you need to know it actually started out as Der Ententanz (The Duck Dance). Back in the late 1950s Swiss accordion player Werner Thomas was tending to a flock of duck and geese and became inspired! He whipped up a ditty just for them and played it in his restaurant in Davos, Switzerland. Just like today, the audience reaction was instantaneous. People immediately began flapping an arm here and a leg there, which made Thomas think of his flock. Soon the dance evolved to the beak, wing and tail motions we know and love.

A couple of decades later a Belgian publisher heard the hit and added lyrics in his native Dutch. The Duck Dance became a hit across Europe! Years later it finally made its way to America when a New York Publisher heard its oompah roots and insisted it be heard. He changed the name to Dance Little Bird and gave it English lyrics: “Hey, you’re in the swing/You’re cluckin’ like a bird (pluck, pluck, pluck, pluck)/You’re flappin’ your wings/Don’t you feel absurd.”

Yes, we feel absolutely absurd…and we love it! 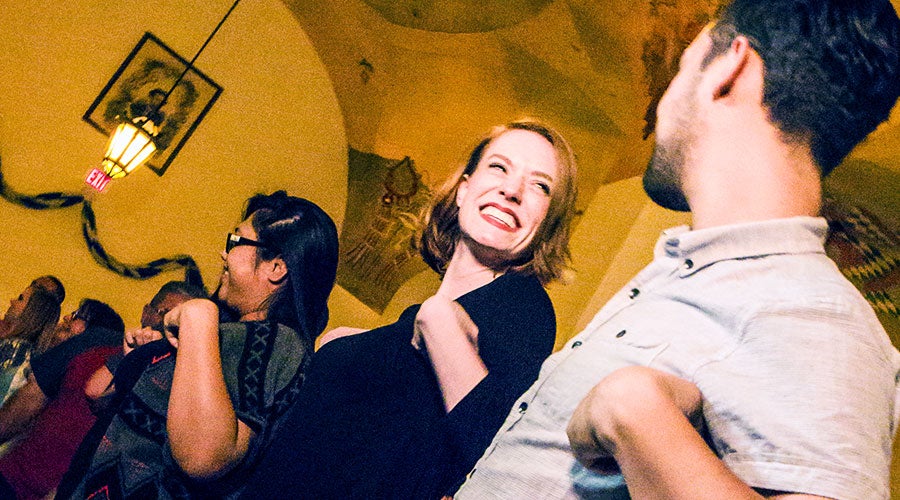 The words didn’t catch on like the dance did, and by the late 1980s the moves began taking over Oktoberfests, weddings, bat mitzvahs and other celebrations.

Where did the chicken come from?

There are many stories as to how it became the Chicken Dance. One states that it was re-introduced to the U.S. in 1981 during the Tulsa, Oklahoma Oktoberfest by the Heilbronn Oompah band from Germany. They wanted to incorporate costumes into the dance but Tulsa was short on the duck variety. However, a local TV station happened to have a chicken costume lying around…and it stuck. People began requesting the Chicken Dance every chance they could!

Today there are more than 140 versions of Der Ententanz/The Chicken Dance recorded worldwide, but no one does it up quite like our Haus bands.

We hope to see you shaking your tail feather on our benches!