Who will be the Winner?

From Michael Jordan to Michael Phelps, some people train their whole lives to become a champion. But at Hofbrauhaus Las Vegas you don’t have to be able to catch three feet of air or rock a Speedo to bask in the glory of domination.

You just have to be able to hold your beer.

And not in your belly. We’re talking about the annual Masskrugstemmen Competition. 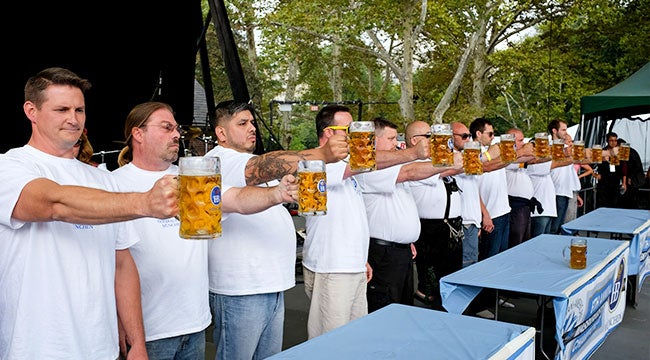 Masskrugstemmen (Mahss-kroog-stem-men) aka Stein holding, is a Bavarian contest of strength, determination and pure stamina. And it’s exactly what it sounds like. You hold a full one-liter stein of brew as long as you can; if you outlast your competition, you’re the champion.

A full stein of beer weighs about 5.5 pounds (2.5kg), which may seem like child’s play — but when that stein is held with one hand, straight out in front of your body (no bent elbows!), and parallel to the ground, it starts to feel more like a brick than beer.

The average guy usually lasts about five minutes, while the average girl can usually hold on for up to two minutes.

To be one of the greats, you have to train like a great. And believe it or not, there are methods to mastering the art of the hold.

If you have dreams of outshining your beer-loving counterparts your chance is coming up during our annual Stein-holding Competition, Now – July 30, 2022.

The rules are simple: 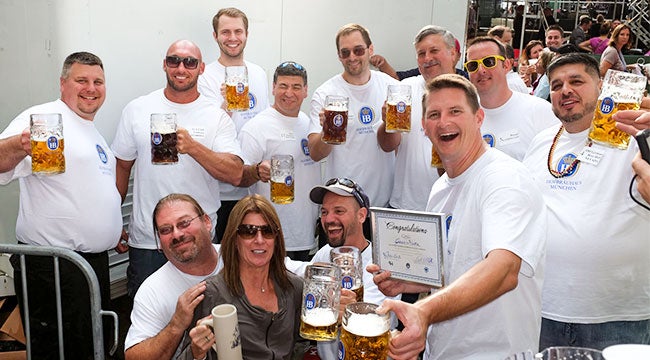 The winner gets more than bragging rights, too. You’ll also win a trip to New York City to represent our Haus in the National Masskrugstemmen Championship on September 17. The trip includes round-trip airfare, hotel accommodations and some spending money.

But that’s not all. If you’re crowned the U.S. Masskrugstemmen champion in New York you’ll earn a trip for two to Munich, Germany, home of the original Hofbrauhaus! The prize includes round-trip airfare, hotel accommodations, a guided tour at the Hofbrau brewery, and dinner at the Hofbrauhaus.

Are you ready to be a champion?
Start training now and reserve your spot at our Haus today!